Akwaaba means “Welcome” in the local Fante dialect and as with last summer’s United Youth Corps opportunity in Nigeria, the brethren here in Ghana “akwaaba-ed” us with open arms. When we arrived into the airport in Accra, Ghana (a day late, and a few dollars ahead thanks to the exchange rate) Henry Aikens and Isaac Tetteh, met us at the airport and brought us to the facility that we will be using for this year’s camp.

We settled into our digs for the week and polished off a dinner of Jollof Rice and Chicken, then after a short night’s sleep, it was off to the Cape Coast and Agona for the Sabbath.

On Friday morning, we enjoyed the drive to the Cape Coast, which took us through the outskirts of Accra and into the countryside. The sights, sounds and smells of the local villages we zipped through as we motored to our destination were wonderful. Ghana is a beautiful country, with very green and lush forests, and as we neared the Cape Coast, the consistent view of lush vegetation gave way to swaying palm trees and the Atlantic Ocean.

We had the opportunity to go out and visit Mr. Benjamin Agyapong, the Pastor of the Agona, Winneba, and Kwanyako congregations. He gave us a tour of the Cassava Mill project that he and the local brethren have begun, which represents a wonderful opportunity for the brethren in his three congregations. More will be coming on the Cassava Project in another blog post.

Following the tour of the cassava facility, we were headed back down the road toward Cape Coast, and toured the Cape Coast Slave Castle.

There were three primary output points for slaves headed to the New World out of Ghana; one in Accra, one in Cape Coast, and one in nearby Elmina. The Cape Coast Castle is an imposing stone structure that juts out of the ocean and has served as a fortified location under English control for the better part of 400 years.

It was an interesting, but sobering tour, as we were able to see and experience firsthand the kinds of conditions that the people who were kept in these cells had to experience, some for as many as three months. There will also be more coming on the Cape Coast Castle. Stay tuned.

A large number of the brethren in Agona speak Fante, in addition to English -- some only Fante, which makes communication a bit more of a challenge for those of us are not Fante speakers. Myself and the United Youth Corps members have been (to this point relatively unsuccessfully) working on learning the basic aspects of it in order to be able to interact more with the brethren, but personally -- I find that my mouth and tongue does not want to do the necessary acrobatics to successfully pronounce the words. I am learning however, and thus far have learned, “Welcome,” “Good morning,” “Good afternoon,” and “Good Evening,” “Thank you,” “How are you?” and “I am good.” The two young ladies from Malawi, Lancy and Julianna Kachali, seem to have a bit of an easier time pronouncing the words, and have been very helpful reminding me when I have grotesquely mispronounced something, but I find that the laughter from the brethren is a good sign as well.

Myself (Ben Light) and Mr. Paul Moody gave split sermons on the Sabbath in Agona, and for myself, it was the first experience that I had with speaking through a translator. Mr. Benjamin Agyapong, the Pastor of the Church in Agona translated for us both.

I spoke on Healey’s Law -- the three rules of holes.

1.    When you find yourself in a hole. Stop digging.
2.    A hole must be filled in in order to prevent it from becoming a hazard.
3.    A hole not filled in as soon as possible will cause more damage in the future.

I likened it to our calling -- that when we began our relationship with God we found ourselves in a Hole. Through the sacrifice of Jesus Christ, God lets a ladder down that gets us out of the pit. We can’t get out on our own -- we must accept the ladder. Trying to climb or claw our own way out only showers more dirt down on us. He then asks us to step away from the shovel, to leave that sin behind -- to fill in those holes with his way, and the word of God, and to be diligent in examining our lives and promptly filling in the holes that we find.

Mr. Paul Moody, the Senior Pastor of Ghana and Nigeria, spoke on the importance of loving our enemies. It’s one of those difficult things that God asks us to do, to love and care for those who spitefully use us, or attempt to cause us harm -- but the reality is, it is exactly what Christ did for us. He died for us while we were still carnal human beings, in enmity with God.

While we were still enemies.

… and not just for us. For all of mankind, the entire world. Even that guy across the street that drives you crazy. As a result of that, forgiveness, care, concern, and love for our enemies is a necessity as we work to emulate and model our lives after the example of Jesus Christ.

Lancy and Juliana Kachali, from Malawi provided us with very beautiful special music in their native tongue, a song about the trials that we face, the help that God provides, and the promise of the Kingdom.

After services were over, we had the opportunity to go out and to meet all of the brethren. My local Salem congregation is flush with kids -- but I think Agona has us beat. There are between 120-150 brethren in the Agona church, and I would guess close to half are children, teens and young adults.

It was an absolute joy to watch the children warm up to Liana and Rebecca Novak, as they played and sang together.

Unfortunately, all good things must come to an end, and it was time for us to go. We’ll see many of the young people at camp, but it’s bittersweet knowing that we may not have opportunity to see some of them again. God willing -- our paths will cross again, but it’s hard to know the future.

While in Agona, we had opportunity to meet with the Village Chief, Nana Terpor the Fifth, a friend of Mr. Mark Mickelson the previous Senior Pastor in Ghana and Nigeria and of Mr. Benjamin Agyapong. He was not available the previous day, and made a special audience for us to visit. Chief Terpor opened his home to receive us and greeted us all warmly, welcoming us to Agona. He introduced us to his team of spokesmen, strategists, the Queen Mother, and numerous others. He even desired to have a photo taken with all us and his cabinet.

Mr. Moody presented him with some gifts that Mr. Mickelson sent, and he received them warmly. The shirt was one of the gifts, and he quickly went and put it on so that we could get a picture with Mr. Moody and myself to send back to Mr. Mickelson. Paul was asked to print and frame the photo and bring it with him next time for Nana Terpor to have.

Once the audience was over, and we were given permission to leave, we hit the road putting a close on a wonderful couple of days in Agona. 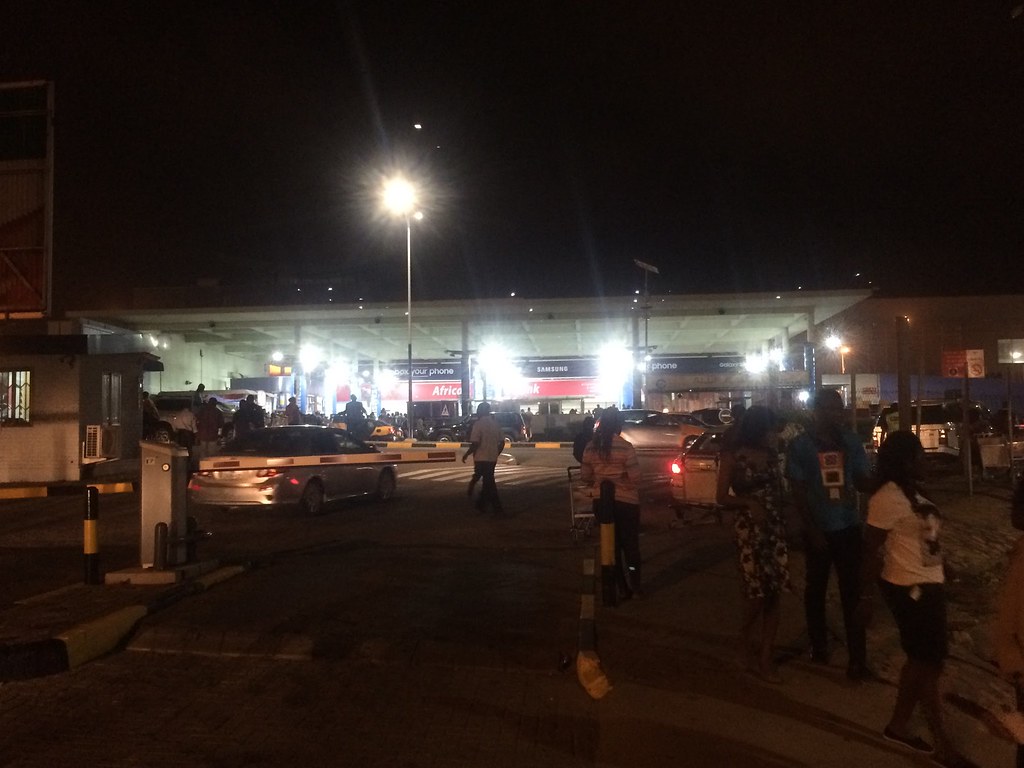 Ben is an elder serving as Pastor for the Salem, Eugene, Roseburg, Oregon congregations of the United Church of God. He is an avid outdoorsman, and loves hunting, fishing and being in God's creation.