Intro to Apologetics: Having Conversations About Your Faith

Having respectful conversations about our faith with others is an important way we can live out our faith, and it is a discipline we should all try to master.

Having a conversation about religion at school or work can be an intimidating task. For many young Christians, the realities they face on social media and IRL point to a society that has become less accepting and tolerant of Christianity.

Christian beliefs, lifestyles and values contradict many prominent voices of the modern world. That being so, it’s easy to become defensive or insecure when we hear comments we don’t agree with or that simply mock God or our beliefs.

However, having respectful conversations about our faith with others is an important way we can live out our faith, and it is a discipline we should all try to master. So, if you are new to the apologetics world—or have never even heard of the word—let me introduce you to what it is and how it can look in everyday life!

The word apologetics doesn’t mean to make an apology for your faith when someone doesn’t agree with what you have to say or what you believe. Apologetics means to give a well-reasoned and graceful defense—an answer to something controversial in your conversations with someone else—in a way that makes sense to them and is relevant to their experiences. As Solomon said in the book of Proverbs, “To make an apt answer is a joy to a man, and a word in season, how good it is!” (Proverbs 15:23 Proverbs 15:23A man has joy by the answer of his mouth: and a word spoken in due season, how good is it!
American King James Version×, English Standard Version).

In order to practice Christian apologetics in conversations with friends, acquaintances or strangers, it’s important that we first understand the depth of another person’s beliefs before we make any kind of defense of our own. We can all do this by asking a question as simple as, “What do you mean when you say . . . ?” Of course, it might be a good time to ask a quick, silent prayer in your head for guidance as well!

This question, or any question that seeks to understand someone else before we expect them to understand us, is the key to finding out what kind of barriers someone truly has towards God and Christianity. It’s the backbone of effective and meaningful conversations because for some, there are intellectual barriers to God, while others have personal barriers based on their experiences with Christianity, and that’s just not something we can assume on the surface. 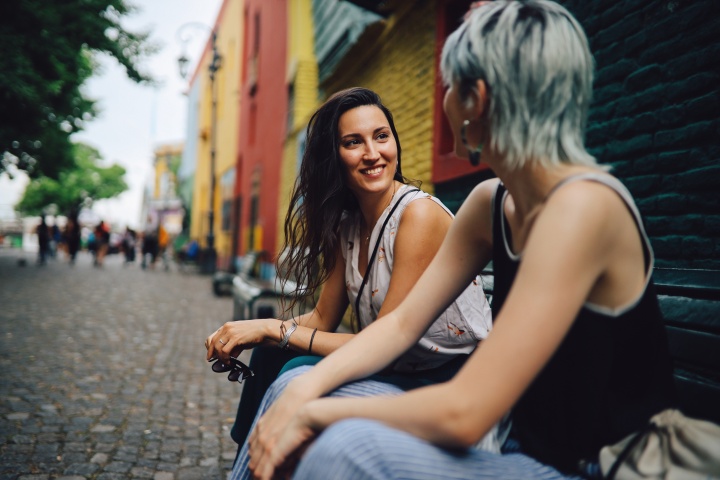 Christianity, like the rest, deserves to be cross-examined and respected for its differences, and we can encourage others to do so!

First, let’s start with an ineffective example of conversational apologetics. Say someone says that he or she doesn’t think the Bible was actually inspired by God. If we respond, “Well, the Bible says, ‘all Scripture is inspired by God’ in 2 Timothy 3:16 2 Timothy 3:16All scripture is given by inspiration of God, and is profitable for doctrine, for reproof, for correction, for instruction in righteousness:
American King James Version×,” this answer is going to fall on deaf ears.

Though this scripture is true, this person is saying he or she is not sure that the Bible is a reliable source. So if we quote a scripture to defend Scripture, we are attempting to convince someone to trust a source by citing the very source they are unsure of. This answer won’t make any sense to them, because it causes circular reasoning in their mind.

On the opposite end of the spectrum, if we try to convince someone the Bible is true with all of the historical evidence we can think of to validate the Scriptures, or by telling them that they just need to have faith, we may also lose them because we haven’t sought to understand where they are coming from first.

We need to start by asking what makes them skeptical of the Scriptures and help them tackle those doubts first. So for example, if this person explains more of where they are coming from, and you discover that the reason they don’t trust the Scriptures is because they believe that all religious texts are pretty much the same, then, any of our previous answers would have been a missed opportunity to reach them where they are at. You see, this person is not wrong for believing that all religions and their texts cannot be equally true. Christianity, like the rest, deserves to be cross-examined and respected for its differences, and we can encourage them to do so!

What’s at the heart

I once had a conversation with a coworker about a personal dilemma she had in believing in God’s existence because of the suffering that we experience in life. This conversation began when someone in the breakroom shared an unfortunate event that happened to someone. Out of left field, my coworker vehemently said, “and that’s why I don’t believe in God, because if God were real or if He cared, He wouldn’t let that happen to them.”

This topic was obviously relevant to her experiences and had to be addressed tactfully. Having known her for about a year, I felt it was important that she was heard and given an opportunity to hear an explanation for the turmoil and hurt she had experienced in life. As our conversation continued, it was clear that we weren’t discussing God’s existence, but whether or not He actually cared and deserved to be believed in.

I empathized with her feelings of despair and told her about a child I knew who died very young, and how I still mourn that loss of life—how I still choke up just thinking of it today. Though I do not know why this child had to suffer—only an omniscient God could know—I still believe that it’s possible for God to be loving in a world where evil exists.

I explained to her that if God had created a world in which evil could not exist, He would have created a world where humans never had a choice—and by doing so they couldn’t have chosen to love. Or, if God truly didn’t care, He could have created nothing at all. Nonetheless, because of His sacrifice, way of life and promises He has made, I will hold on to hope that He knows how to restore this world and resolve all of the evil, injustices and suffering that we experience. Our conversation ended respectfully, with a mutual understanding of our differences.

The example before us

When we look at examples of apologetics in the Bible, we see writers who each understood their audiences’ cultural roots and addressed the barriers in their ideologies. For example, when writing his gospel account, Matthew used genealogy to defend the bloodline of Jesus Christ to the Jews. By contrast, Mark did not include a genealogical introduction to his gospel account in his appeal to a gentile audience.

Likewise, Luke’s writings gave an historical and orderly account of Jesus, which he backed with other eyewitness accounts, just as the Greeks did. But John wrote his gospel account and letters from a theological perspective to address Jesus’ testimonies and ideas that were circulating through his Palestinian-Jewish audience at that time.

Paul preached to citizens of Athens at the Areopagus of their “Unknown God” as the foundation of his witness testimony of Jesus Christ (Acts 17). And Jesus showed Thomas the marks on His hands from the crucifixion when Thomas could not believe based on the reports of others alone (John 20:24-29 John 20:24-29 [24] But Thomas, one of the twelve, called Didymus, was not with them when Jesus came. [25] The other disciples therefore said to him, We have seen the LORD. But he said to them, Except I shall see in his hands the print of the nails, and put my finger into the print of the nails, and thrust my hand into his side, I will not believe. [26] And after eight days again his disciples were within, and Thomas with them: then came Jesus, the doors being shut, and stood in the middle, and said, Peace be to you. [27] Then said he to Thomas, Reach here your finger, and behold my hands; and reach here your hand, and thrust it into my side: and be not faithless, but believing. [28] And Thomas answered and said to him, My LORD and my God. [29] Jesus said to him, Thomas, because you have seen me, you have believed: blessed are they that have not seen, and yet have believed.
American King James Version×).

No matter what perspective the audience came from, we see that the ones who preached the gospel before us reached their audience where they were and made a defense for Jesus from there.

Though much of the Western worldview shares its roots in Christianity, our schools, workplaces and institutions are now predominantly secular—or non-believing by nature. So, in our spiritual conversations with others, remember to ask questions and search out the answers to people’s barriers—what it is that holds them back from believing what the Bible says is true. Turn those controversial conversations into meaningful ones.

By doing so, we can demonstrate respect towards their doubts and show love by reaching the hearts and minds of each individual, and effectively use apologetics to make a defense for our faith.  CC